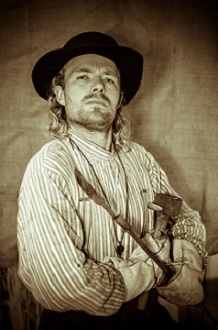 Harri Anttila was born February 23rd 1977 in Kajaani, Finland. From the age of five he lived in Oulainen, until in 2004 he moved to Rovaniemi. By profession he is a carpenter and works in the Rovaniemi region.

His family includes his wife, two sons and three dogs. Harri lives in a detached house in Rovaniemi, which allows him to make knives at home, as the garage and the workshop are close by.

In the summer Harri goes to multiple events where he holds forging demonstrations. His hobbies include, amongst others, Ultramarathons, agility, dog shows and hunting. Harri works as the chairman of the Rovaniemi Unit 131 in the Finnish Construction Trade Union, and from the end of May 2015 up until the end of May 2018 as a deputy member in the board of the Finnish Construction Trade Union.

Harri sparked an interest in knife making already at the age of four when he first forged together with his grandfather Unto Anttila in Haapavesi. In the workshop Harri first forged a four-inch iron nail. Thats when his enthusiasm was born for the familys traditional knife model and techniques.


Some of Harris milestones in sports:

Bronze medal in the Finnish championship in relay skiing.

Bronze medal in the Finnish championship in Ultramarathon, 100km run, record 8:22:38. Harri represented Finland in the World Championship in the 100km run in Italy, 2008.

12-hour Ultramarathon record 131.686 kilometres, which was also the national record of Finland in 2008.

3rd place in a two-day adventure competition in Syötesalens -tour.

Harri won the Finnish championship, organised by the Knife Association of Finland, in 2015 in the category of premade utility knife. The competition was held in Fiskars 16th May. The knife Harri submitted for the competition was a tiger striped knife, which you can see below.


Australian Kelpie is the first champion dog of the family

Family's dog named Oho in the picture in autumn 2016.


In the autumn of 2012 knife-smith Harri Anttila was on Finnish television trying to make a record in splitting hair using a knife he had made.

Watch the video below to see how it turned out!